In the Land of the Blind: Men in "Orange is the New Black"

Back in April I wrote about the silliness of changes made to World Book Night to make it more appealing to men. And men, I am afraid, are a problem yet again.

Recently we have been watching the first season of Orange is the New Black. We have only one episode left to watch and I am genuinely excited to see it.


However, when we got to the end of episode no. 12, Deb showed me this tweet;


This is a joke, right? No one SERIOUSLY wrote this and got it published, right? pic.twitter.com/IYfEFtUxl6
— Lisa McIntire (@LisaMcIntire) June 30, 2014

And, you see, the thing is, that throughout the programme, I’ve been saying something deceptively similar.

If you’ve not seen it, Orange is the New Black is a series about a thirty-something white lady who goes to prison having been convicted of transporting money for her drug smuggler girlfriend ten years previous. We follow her prison life and learn about a large cast of female inmates. The dialogue is snappy, there are some good actors, and most importantly, it has Captain Janeway doing a Russian accent (I nearly fell off the sofa. Literally.) 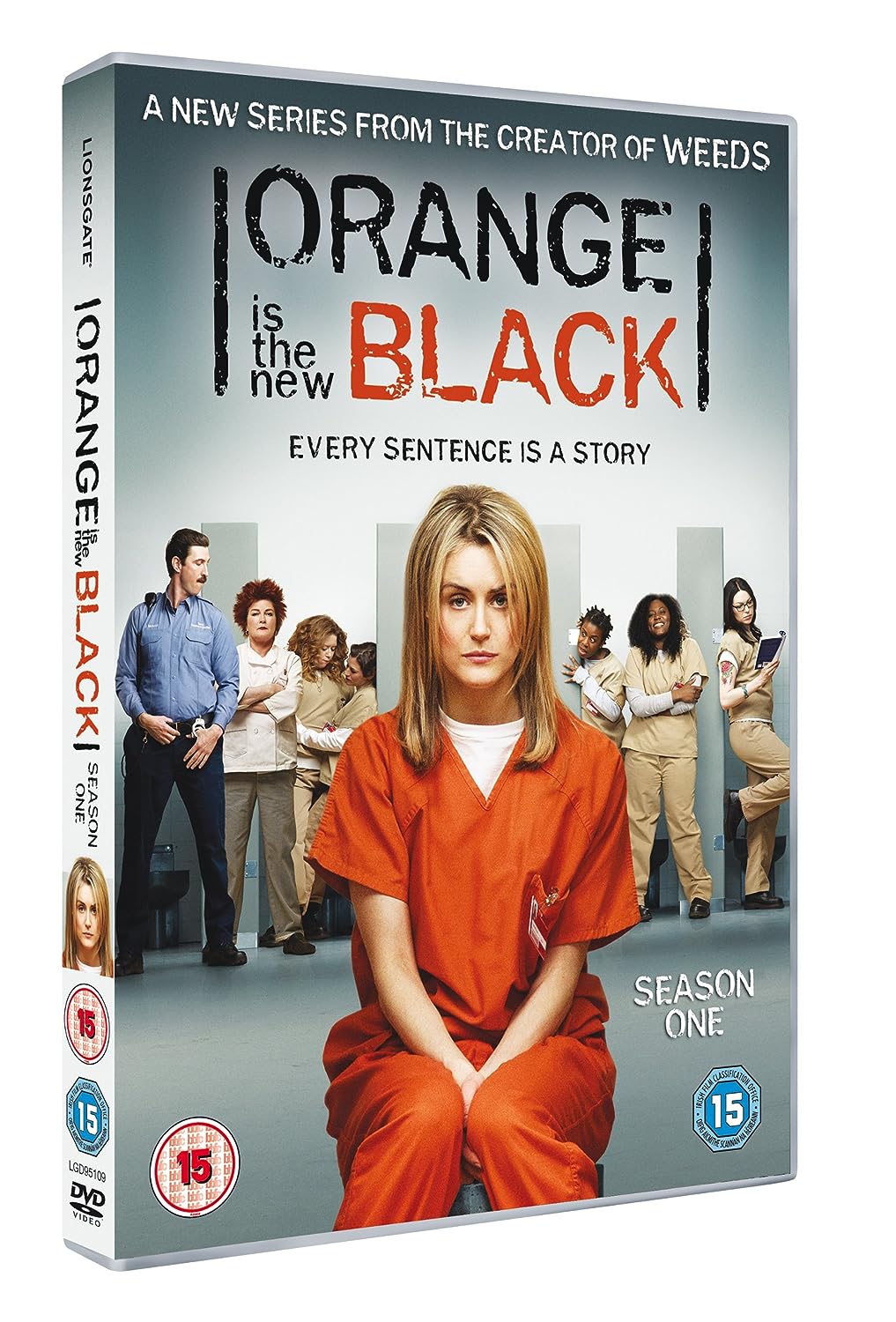 It is a remarkable piece of narrative in that it has a large female cast who are all individual, fully rounded characters of different ages, races and sexual orientations. They are not universally motivated by love, and when they are, that love needn’t be one involving a strapping full-back.

(As an aside, it also features disabled characters. And there is a truly *brilliant* scene involving a troubled youngster in a wheelchair. Worth the cost of the DVD alone.)

It is tremendously frustrating, therefore, to find a really large hole in this magnificent thing. But it is there. In fact, there are four of them! But let’s concentrate on the most important thing - won’t someone please think about the men!

Men. I am one, you know? And as such, I am in a position of tremendous good fortune. If I want to find a role-model in narrative, I have a cubic megatonne to choose from. I do face some limitations (for example, there are relatively few disabled male role-models who don’t overcome their disability to be something tremendously heroic), but they are negligible in the face of the limits placed on women.

When studying the Women in Antiquity course as part of my Classics degree, I read and very much enjoyed Pomeroy’s Goddesses, Whores, Wives and Slaves: Women in Classical Antiquity. And scarily, these are, generally speaking, still the choices left us when we talk about women in fiction (and, often, in life too...). Maybe she is the supporting wife. Or a slave to a passion. A slut to be used and shamed. Or a goddess to save us all.

And so it’s extraordinarily easy to write a typical female character. You’ve got four options and, if you want some variety, just choose two and mix ‘em! If you doubt this, just look at the majority of the female cast of Buffy the Vampire Slayer.

When you’re creating a male character, however, you carefully think about their job, their relationship with family and friends, hobbies and desires etc. They necessarily become rounded and real. A proper person.

When it comes to Orange is the New Black, however, the writers have taken the latter route of character creation and used it to create rounded, complex, interesting and real women (with an exception...more on which later).

And you can tell that as soon as you do this, some people are going to look at the huge female cast and think “Well this is a bit odd - where are all the men?”. And it does feel a little like that, even to me. It’s just I don’t see that as a bad thing at all. But I can understand how someone could see that and say that the men are ‘barely and inadequately represented’.

That sounds to me about as many male characters as you could possibly fit into a story about a women’s prison! So men are very appropriately represented. They are, as men usually are, all distinct and named. It’s possible that I’ve forgotten and there has been an episode without men in it, but I sincerely doubt it.

However, what I would vehemently argue is that although there is a more than adequate representation of men, they are not written with the devotion lavished on the female inmates.

Although there are distinct men, we never really see beyond the mask. The main villain (a moustacheod prison officer) is truly awful to his charges. We can make some guesses about his life story, but they remain, up to episode no. 12 at least, entirely unexamined. Likewise, the more likeable prison officer has an interesting story of sorts (he is an amputee), but again we do not really see any depth.

The biggest problem for me is Larry, the fiancé of the main character. I find their relationship annoying at best, and a complete mystery at worst. We cannot feel genuinely sorry for any of his suffering because we only see very controlled, minimal signs of a normal life. He is a caricature being used to very poor effect.

Of course, the problem is that as soon as you think these things, you see that they’re not universally the fate of the betesticled cast. There are female prison officers who receive just as little examination and care. But, again, we’re so used to nameless women in the background, they just fade into acceptance.

So what does this mean for the series? We’re to write it off as a failure because it’s not taken universal care of its cast of characters?

Pick five pieces of great narrative. Do the majority treat men and women with equal care and love? I doubt it.

Problematic fiction can be hugely entertaining and fun. You have to suspend a little bit of your brain that argues against it. I’ve watched the first three series of Game of Thrones and there have been times when I have been sickened by the so called ‘sexposition’. And yet I’ve still watched it. And enjoyed some parts of it enough to continue watching it.

The only real problem with problematic fiction is that it can never be truly great. And that’s where I feel that, if Orange is the New Black had managed to tick all my boxes it would be a truly great piece of fiction. And that, of course, would be wonderful.

But not everything can be great. And it is perhaps just as important to have fun, problematic stuff available where women are fully rounded characters as it is to have pieces of truly great story telling now and again.

But that probably won’t stop me from shouting at the television when I desperately want them to spend a minute looking at why a man might be doing something. Because maybe that might make the impact of his actions greater...grrr!

I must just add, however, the other three problems I have with Orange is the New Black. Firstly, no one uses the word ‘bisexual’, and there is such a naivety about the whole subject that I find it distracting.

Secondly, and much more importantly, there are aspects of sexual morality which I find troubling.

1.) there is a sexual relationship between a guard and prisoner which is painted in a very romantic light. Both characters are inadequate, but this is made worse by not really understanding the man’s motives given his lack of three dimensional character. Also, the consequences are discussed, but never in a way that suggests the act to be wrong...only that they might be discovered and punished (unfairly).

2.) there are instances where same-sex intimacy are used as a threat against a religious fundamentalist. Of course, the fundamentalist is a thoroughly horrible character deserving justice...but this kind of ‘justice’ is nothing of the sort and feels, to me, like it’s meant to be chortled over.

Finally, and most upsetting of all the problems - throughout the first series there has been a number of interesting stories told by a variety of women. Because of this we see things we don’t often see -


But all of these stories have to be framed around the experience of our blonde, white main character. Ten years in prison having murdered a man who abused a girl? Yeah, a few weeks in and Blondie can relate. It’s sickening. Also, the ridiculous love story, made more ridiculous by the lack of proper character exploration of the chap, is an example of standard narrative being shoe-horned into a much more interesting and individual narrative.

It certainly has problems. But I’m sure I’ll cope.
Posted by Stephen at 18:03